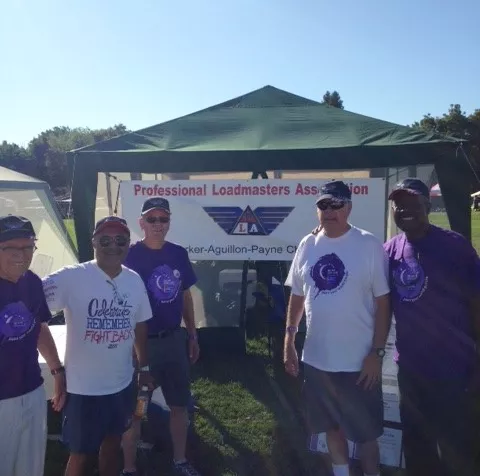 The first Professional Loadmaster Association chapter to be established outside of the founding fathers home state of Washington is the Parker-Aguillon-Payne Chapter in Northern California, Fairfield (Travis AFB).  This is also the only chapter that is named after Loadmasters that gave their lives in the defense of their country.  MSgt Wendle L. Payne, TSgt William M. Parker, and TSgt Felizardo C. Aguillon. They were on the ill-fated C-5 that crashed after departing Tan Son Nhut AB, South Vietnam on April 4, 1975 in support of Operation Babylift.

A C-5A Galaxy, serial number 68-0218, flew the initial mission of Operation Babylift departing from Tan Son Nhut Airport shortly after 4 p.m. on April 4, 1975. Twelve minutes after takeoff, there was what seemed to be an explosion as the lower rear fuselage was torn apart? The locks of the rear loading ramp had failed, causing the door to open and separate. A rapid decompression occurred. Control and trim cables to the rudder and elevators were severed, leaving only one aileron and wing spoilers operating. Two of the four hydraulic systems were out. The crew wrestled at the controls, managing to keep control of the plane with changes in power settings by using the one working aileron and wing spoilers. The crew descended to an altitude of 4,000 feet on a heading of 310 degrees in preparation for landing on Tan Son Nhut's runway 25L. About halfway through a turn to final approach, the rate of descent increased rapidly. Seeing they couldn't make the runway, full power was applied to bring the nose up. The C-5 touched down in a rice paddy. Skidding for a quarter of a mile, the aircraft became airborne again for a half mile before hitting a dike and breaking into four parts, some of which caught fire. According to figures, 138 people were killed in the crash, including 78 children and 35 staff members from Defense Attaché’ Office in Saigon, which included our 3 loadmasters.

We are honored that MSgt Payne, TSgt Augillon, and TSgt Parker’s families have given us permission to use their names for our chapter.

Our chapter has been very active in local charity events such as the American Cancer Society, Relay for Life.  Since 2003 our chapter has raised more than $300,000.00 to support this very special event.

In addition, our chapter awards an annual Scholarship of $1,000.00 to family members of our chapter loadmasters.

We welcome all Loadmasters from Northern California and Northern Nevada to join our local chapter and are also proud of current members that have moved and continue to request they be associated with our chapter.

Please join our next meeting on the 1st Tuesday of every month at the Delta Breeze Club (NCO Club), 1900 hrs.

We again hosted our chapters annual Christmas Party at the Travis Heritage Center (Museum) December 3, 2016.  It was catered by the Delta Breeze (Club) and fun was had by all.  We have been fortunate to have outstanding members that participate in our social events throughout the year.

JC Wiley and Mark Raymond took some time to visit the active duty squadrons, 21st Airlift Squadron and the 22nd Airlift Squadron to promote our local chapter and ask for nominees for the PLA Loadmaster of the year.  CMSgt Jim McElwee from the 21st squadron and CMSgt Chris Carson from the 22nd squadron were very receptive to our visit and both provided nominees for the PLA Loadmaster of the Year.  They were also very interested in our chapter and have been advocating to their troops to check out our chapter.  We do understand the overwhelming commitment the flying squadrons have these days and can appreciate and understand the need to have family time when they are home.  Nevertheless, we are a consistent and dedicated chapter and our support is always there if needed. I received a request from an active duty loadmaster to provide “…additional information about the benefits that the PLA offers for active duty loadmasters”.  I guess some look at us to provide benefits to them, however our chapter promotes the loadmaster career field, provides support to our loadmaster’s families, participates in local charity events, and establishes a very special comradery among our peers.

As start the New Year we are again moving forward to support the American Cancer, Relay for Life, in Vacaville California.  We have been participating since 2003 and raised nearly $300,000.  We have either been first or second highest fund raisers for several years.  We already had one social fundraiser and plan on having another in March or April.  The Relay for Life will be held on 23 – 25 June 2017.

We are looking forward to another summer to volunteer at Sonoma Raceway, for NASCAR, NHRA, and the INDYCAR races. This is our chapters’ opportunity to raise money for our annual scholarship and Christmas party.  We had the best support from our members in 2016 and raised the most we ever have to support our events. Thanks again to a very special group of supporters, Bill Bostock, Arne Suvatne, Jim Rost, JC Wiley, Al Horwedel, Jim French, and Max Gaine for volunteering at the raceway.

We have been having our monthly meetings the first Tuesday of each month at Delta Breeze Club (NCO Club). If you have any question, please contact Mark E. Raymond at mark.raymond@att.net or mark.raymond@kc10ts.com.